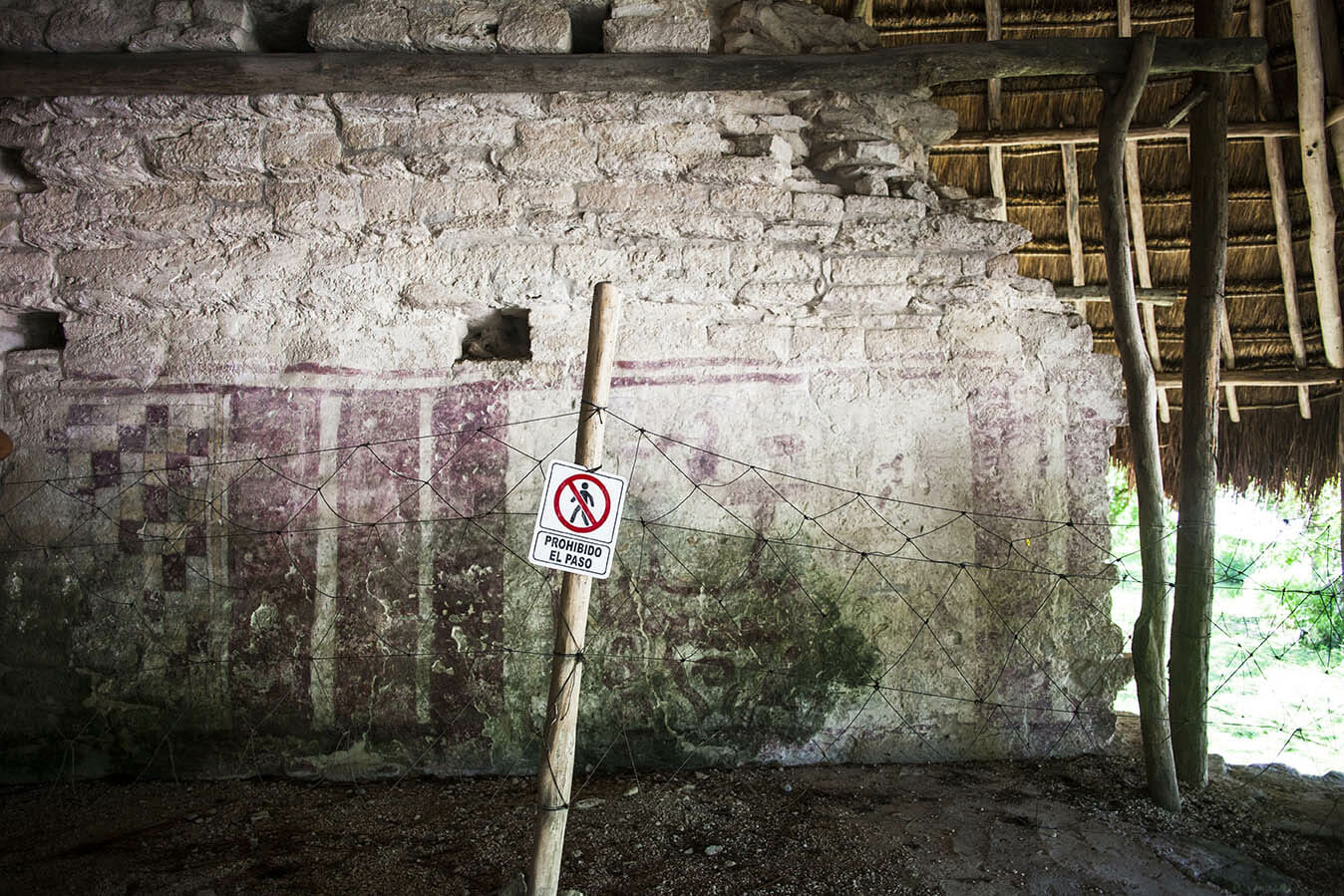 The Xelha ruins are located on the Riviera Maya, right in front of the popular Xelha amusement park. This park is actually more famous than the archeological site so much so that when we talk about Xelha we just think about the amusement park (unfortunately, we would add, as we don’t support these kinds of artificial places)

Nowadays the federal highway that connects Cancun to Tulum separates the Xelha ruins on the jungle side from the Xel Ha amusement park on the seaside.

Although Xelha ruins cover a small area, they used to be one of the most powerful ports on the Caribbean coasts, of strategic importance.

The natural surroundings, the murals, and the building details make it a very amusing visit.

Let’s find out more about this precious hidden treasure, the ruins of Xelha archaeological site.

SOME HISTORY OF THE XELHA RUINS MAYAN SETTLEMENT

Xel Há is situated right in front of the precious bay (Caleta de Abrigo) on the Caribbean sea where we’ll find the Xel-ha amusement park.

This bay as much as others on the coast, the present Xcaret or Yal Ku, in the old Mayan times they were used as shelter harbors for boats that would arrive from other countries carrying goods.

In fact, they are perfect places for portal activities.

And its history can be summarized in two main eras.

In the first stage, several beautiful palaces decorated with mural paintings were built, something that we can still appreciate on the city walls nowadays.

In the second heyday period, colorful buildings were erected again, including a wall to defend the city. Only a few ancient Mayan cities have a wall, some examples are Tulum, Ek Balam, and Becán.

In Xel Há ruins we find some of the most outstanding mural paintings on the Caribbean coast. Some recall the impact that Teotihuacán (which is considered the great Rome of Mesoamerica) had on the Mayan culture during the Early Classic period (250 AD -600 AD).

As well as Tulum and other Mayan cities on the coast, the architectural style of its last period was the Eastern Coast.

Some of its characteristics are the use of miniature temples, small buildings (shrines) within larger ones, palaces with colonnades, and flat roofs that replaced the vaulted roofs characteristic of Mayan buildings of earlier times.

The style is somewhat simpler than others from earlier times such as Puuc or Chenes, to name two.

Xel-Ha means “water inlet”, in a clear allusion to the geography of the place as we can see in the aerial photo. The Mayan name of the site means xel, “piece or entrance”, and há means “water”.

The chronicles of the Spanish expedition that toured the coast of Quintana Roo in 1527 speak of a small town called Xalá, and half a league away there was a favorable port to disembark.

It is believed that they speak of Xel Há, which Francisco de Montejo called Salamanca de Xala.

XelHá, like other cities on the coast, was still inhabited when the Spanish arrived. When they arrived it was almost abandoned: some died from the new diseases brought by the Europeans (smallpox, yellow fever, diphtheria, etc.), and others fled from Spanish rule, taking refuge in the interior.

Here is an interesting fact about Xelha that not many know

The most relevant murals are located in two of the main buildings:

The Building of birds – where we can enjoy decorations that remind us of the influence that the great capital Teotihuacán had in the Mayan area.

Jaguar group – where the vivid blue and red colors of different murals and the figure of a jaguar can be seen.

HOW TO GET TO XELHÁ

The entrance to the archaeological zone of Xel Há is located next to the main federal highway that runs along the Caribbean coast. There is a small sign.

However, make sure not to confuse it with Xelhá Park, whose access is located in the eastern sector of the mentioned highway. The Park is indicated in a much more colorful way.

Xelha ruins sign is similar to other archeological sites ones, green or blue with a stylized temple on the side.

The tickets are different, pay attention to that.

How to get to Xelha ruins by car

The archaeological zone of XelHá is located 113 km south of Cancun, approximately 1 hour 30 minutes by car, and 19 km north of Tulum, around 15 minutes driving.

Renting a car on the Riviera Maya is something you would want to do if you want to be free to move around and discover all the amazing sites in the region. It’s a relatively safe place to drive, the roads are good and the sites are well marked. Therefore traveling by car is a very good option.

However, remember, if you decide to get a car rental, make sure you include full insurance with 0 deductible so you will drive with no stress.

➣ When renting a car in Mexico we recommend Discover Cars because on their website you can compare different companies and their prices and you can choose between their car insurance or the ones offered by the car rental directly, or both.

How to get to Xelha ruins by local bus

The ADO bus does not make intermediate stops on its way, so you must go by minivan

Mini Van (colectivos): From Cancún, the minivans leave from a parking lot right beside the ADO terminal. You will need to get to Playa del Carmen and from there get another van to Tulum. At the moment they leave from under the bridge of the Carretera federal at the crossroads with the Av. Benito Juarez, but please double-check because they have changed the location for the pandemic and this one is temporary.

If you are in Tulum already, you can get on a minivan from Tulum’s main road and let the driver know as well.

How to get to Xelha by taxi

Every taxi driver should carry the official price list, therefore it should be easy to get a taxi to the archeological site. Just make sure you know the cost in advance. But pay him after. Ask your driver to pick you up.

XelHá is made up of five groups of buildings. The tour first takes you to The Group of Birds structures, famous for its wall paintings, and the low platforms known as the Lothrop group followed by the Palace and the Pilasters, used as residences.

A 540-meter path leads us to what is known as Grupo Jaguar, where we can appreciate the other mural paintings. On this road, you will see a cenote close to the structures.

Something we especially love about the archaeological zones is the surrounding thick jungle that has grown through the year and it’s been left untouched despite the excavations.

Right next to the road is the parking lot and the entrance to Xel Há.

On Sundays, the entrance is free for Mexican and foreigners with permanent residence.

Access to the Mayan ruins is open every day for kids up to 12 ys old, students, teachers, and seniors (must show ID).

How much time do you need to visit Xelha?

Calculate an hour and a half to explore the XelHa ruins without rushing.

👉INSIDER TIPS There is a spectacular cenote inside the Xelha walls, along the path to the Jaguar group. You cannot swim in it but it’s a lovely sight! Do not miss it.

The worst of Xel-ha is that we don’t have much information on the site which would have allowed us to enjoy it even better. That’s what we don’t like about this site.

In reality, it’s mainly what we miss in all the archeological sites, clear historical information, and facts

WHAT WE LOVE THE MOST ABOUT XELHA RUINS

What we love the most about the Xel ha ruins is the tranquillity of the place right beside Parque Xel-ha in the very heart of the Riviera Maya. You can visit without a crowd of people if you go early.

THE HIGHLIGHTS OF XELHA RUINS

The absolute highlights of Xelha ruins are the painted murals, which are among the most representative of the Caribbean coast, along with the murals of Tulum.

In the case of Tulum, we cannot see them because they are inside the building, so XelHá is special to be able to see them.

Whenever we see old paintings, it’s like a window to the past.

WHAT YOU CAN VISIT NEARBY XELHÁ 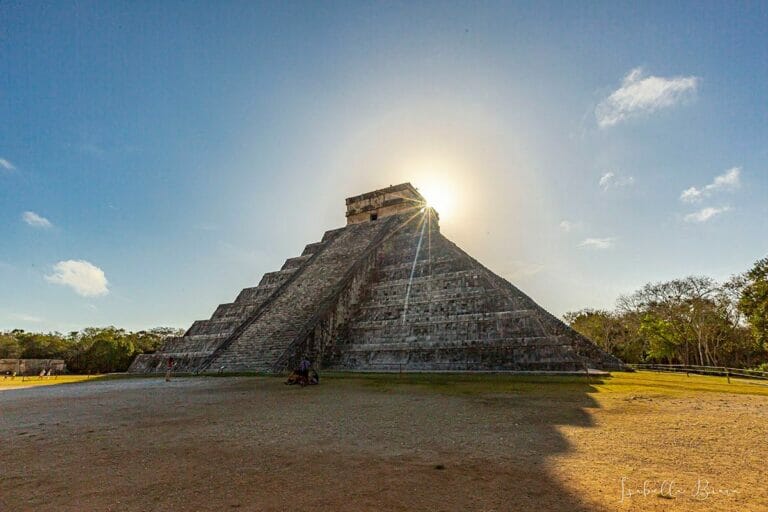 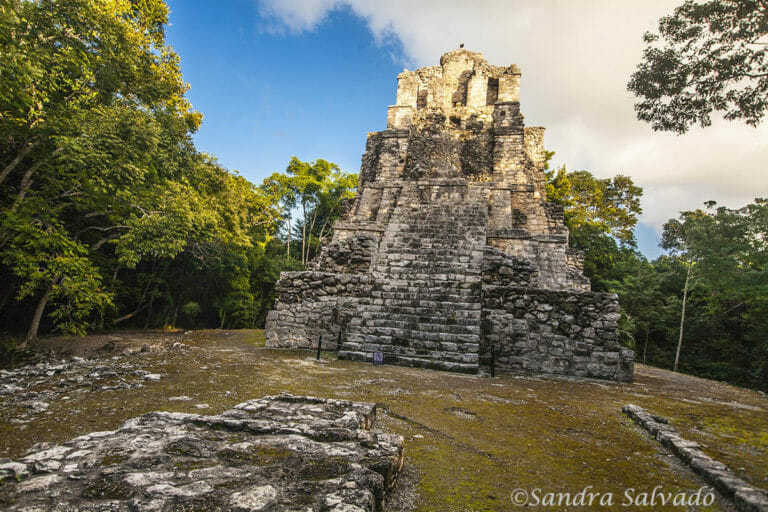 Wondering how to Visit the Muyil Mayan Ruins? You are in the right place as in this post we will share everything you must know about this beautiful site. We will also offer practical tips on how to make the best of your time there and share information that you won’t find anywhere else! The… 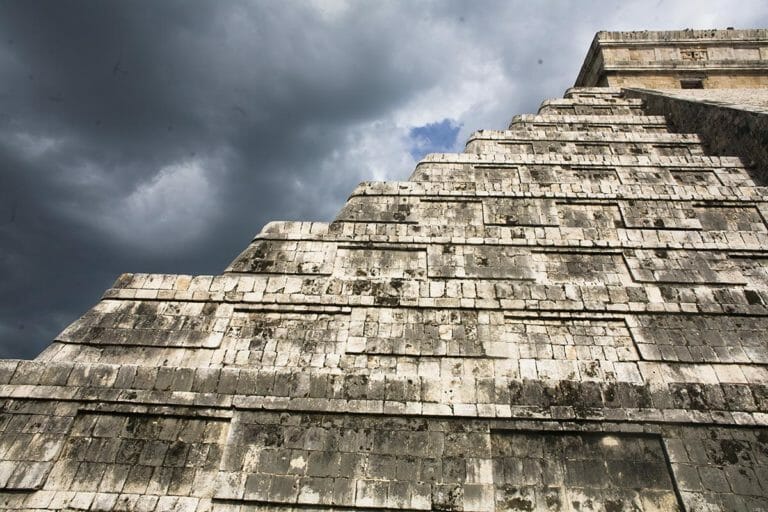 During your trip to Mexico, you have the opportunity to learn about great cultures and the Mayan Ruins in Cancun are a getaway to the Mayan Culture. Mexico is the cradle of fascinating prehispanic cultures such as the Aztec, Holmecs, and the Mayans. The Mayan territory included the coast of the Mexican Caribbean where the… 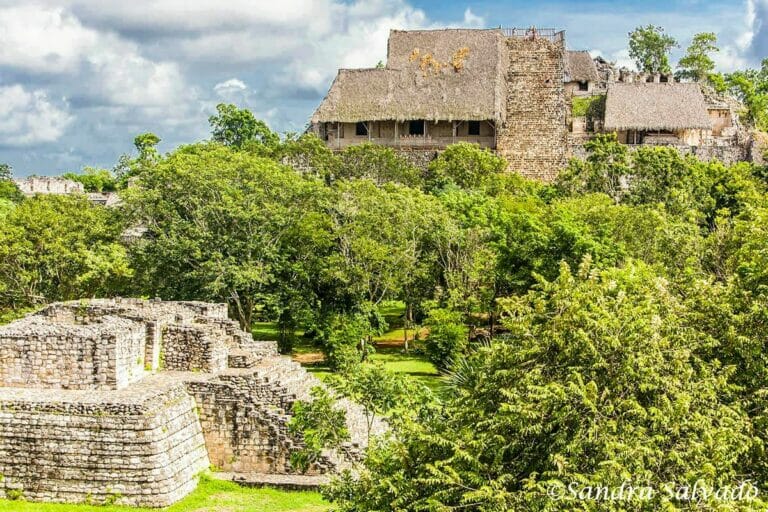 The Mayan Ek Balam ruins are among the most interesting that you can enjoy in Yucatan. It is a great settlement with several attractive elements that you will appreciate if you know about them. In this post, we will tell you all about it so that you can learn about this beautiful ancient Mayan City…

If you are wondering what are the best ruins between Tulum and Chichen Itza, you have landed in the right place. In this post, we are going to compare the two popular archeological sites, Tulum vs Chichén Itzá to help you decide which one is better and more worthy of your time. First of all,… 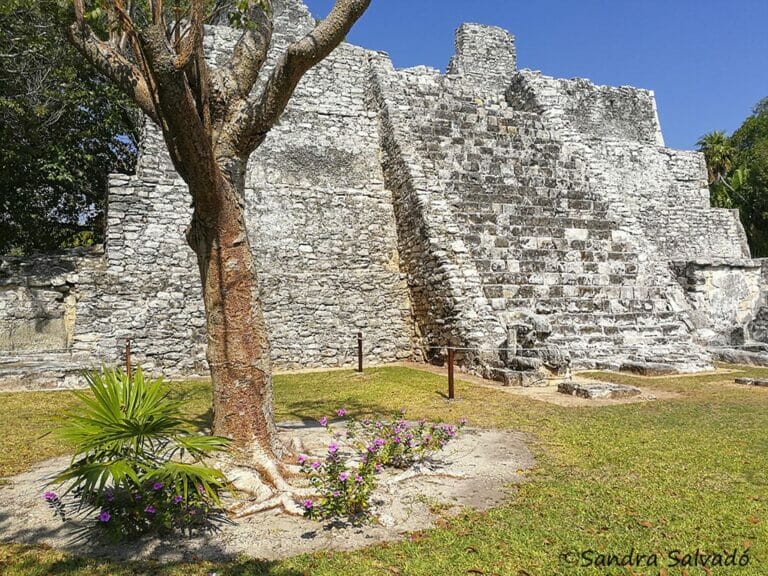 El Meco archaeological site in Cancun is a special place for us, as we have spent many hours together there. El Meco is a small area very close to Cancun downtown and surrounded by captivating nature. When we lived in Cancun, El Meco was one of our meeting places on Sundays, since the archaeological sites…

Hello! We are Sandra and Isabella, friends and Mexican residents, in love with the Yucatan Peninsula and Mexico with its spectacular natural wonders and historical heritage. Sandra is also a certified guide in Mexico. After living in this sacred land for so many years we have been inspired by this beautiful country and its fascinating culture to create this site where we share all we know about the Mexican Cenotes and the Mayan archeological sites. We hope you will enjoy reading it as much as we enjoy creating it. Happy exploring!